Jack is well aware of surgical deficits. Since August, 2010, his fifth and final surgery, he has been unable to swallow because of resulting trauma to cranial nerve in the brain stem, particularly six neurological controlling nerves that provide the innervation for both swallowing and speech. For years Jack has not eaten normally and his intake of nourishment has only been liquid food through a G-Tube.

Never one to give up, Jack has taken therapy since 2010 to be able to swallow again. In 2012 Jack visited the swallowing team at University of California at Davis and participated in a high level “boot camp” for swallowing deficits. His latest therapy was a 2015 trip to New Zealand to have dysphagia evaluation and treatment by a highly recommended team at Eats Clinic, headed by Dr. Maggie-Lee Huckabee. Jack, a prolific author who writes a good story, sent reports with  photos back to EBTS, of his tough work with the Eats Clinic Team. Tests seemed to be going well, but on Day 8, the morning sessions were stopped because the upper esophageal sphincter would not relax. 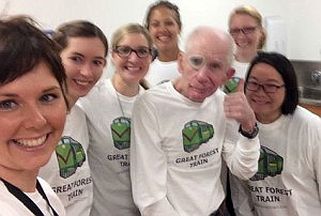 Afternoon Session
Had a lot of trouble getting the catheter in my nose into a good position. Going in four time really wore me out. I was not able to generate the appropriate screens reactions because I was somewhat distracted by the catheter’s placement. Nonetheless, I tried to get in touch with the swallowing process and the rest I had between sessions was positive. Tomorrow will be my last official day. When I return home I will put together a plan to reinvent myself once again, determine what my next steps should be and lay out a plan and my schedule for the next few months.

Jack was advised that unless his esophageal sphincter relaxed, there was nothing that could be done by Eats Clinic to help him swallow. Plans for staying longer at Eats Clinic were halted. Jack commented that he felt the trip was useful, and that he did manage to get feedback gaining information from tests. Always the advocate, Jack with his journey/adventure to New Zealand, provided support to two medical support groups, the Epidermoid Brain Tumor Society (EBTS) and the National Foundation of Swallowing Disorders (NFOSD by placing on his personal web-page his journey with a plea to donate to these medical support organizations.

After his final surgery in 2010, he couldn’t walk, talk, or swallow. Now he can walk, sorta talk (his own words), but hasn’t yet swallowed, though he thinks he’s getting close. He never gives up! In fact, Jack is  “going to make it”! These words are from his titled memoir written about his life in the sixties, focusing on his rock band in Chicago, IL, US, is inspirational in all of his endeavors.

Jack is a man of many talents, from his younger days when he led his own band, Khazad Doom, from suburban Morton Grove, Illinois, throughout the sixties and early seventies, performing in and around Chicago. Artistically, over nine years, they forged a kind of music now called Progressive Rock. As leader, Jack drove the band toward it’s goal of stardom. Jack, in a sixties memoir,  Got To Make It!, wrote of his rock band and about his years with the band and the unusual decade together. After their split in 1972, during the eighties, the band achieved cult status.

Asked about his writing he remarked about his books – fiction-based-on-fact – that readers will read how he parlayed a handful of brain surgeries into a handful of careers and a future. Living up to his plan of reinventing himself again in his remarks after his New Zealand trip, Jack  now utilizes his photography skills by  creating one of a kind artistic works. He truly is a man of many talents.

Entering the corporate world with his MBA in 1974, which took him to 1983, Jack went into photography selling to major corporate clients. Another surgery with deficits and long recuperation time created an author. If you check out Amazon and his personal webpage, www.theamericandramaseries.com,  you will find his American Drama Series.

Jack E. Eadon was born July 6, 1949, in Hammond, IN. Jack grew up in Morton Grove, IL. He was an Eagle Scout. He received his BS degree from the University of Illinois-Chicago and his MBA from the University of Chicago. Jack was a renaissance man. He was in the rock band KhazadDoom from 1963-1973. He was a marketing executive with Quaker Oats. In 1983, he became a commercial photographer and opened Jack Eadon Photographic in Tustin, CA in 1985. In 1995, he became a writer, publishing 8 books through Eloquence Press, his publishing company. In 2014 Jack became an artist. His designs could be printed on clothing through his Gel Art Shoppe and his work is available for sale through Fine Art America. Through all this, Jack had 5 brain surgeries for a tumor wrapped around his brain stem. The surgeries took their toll on Jack physically, leaving him unable to swallow and with difficulty walking and talking. But he never gave up hope that he would be able to swallow again. Jack believed in living life in color – no matter what life dealt you, you should forge ahead and live your best life possible. Jack was loved by many and touched the lives of everyone he met.